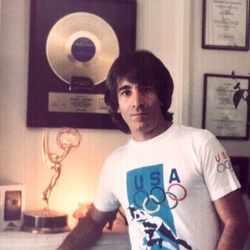 Russ Terrana grew up with a dedication toward music, and that dedication defines his history. He’s spent most of his life surrounded by music - from being an artist with his group The Glo-Worms, (who later became The Sunliners), to then becoming a recording engineer.

Throughout his career, he’s mixed a total of 89 no. 1 hits and 37 Platinum albums, and according to Terrana, what keeps him going is his love for music. “I love the emotion of it,” he said. Though his industry history is wide, a large piece of it was spent at Motown Records, and has been inspiring listeners to this day.

DAYTON, Ohio – Terrana said music has always played a major role in his life. By age 10, he, his brother Ralph Terrana and friends formed a musical group called The Glo-Worms, who later turned into The Sunliners. (After Russ and Ralph began pursuing solo projects, The Sunliners later reformed, becoming Rare Earth).

When The Sunliners were a group, Ralph said one of their memorable set of shows took place in New York, in 1963. According to him, the group had just finished performing in Canada and their shows didn’t go well. “At that point, we thought we were going home,” Ralph said. “Then we got a call to perform for a week at the Peppermint Lounge.”

Ralph said he, Russ and the rest of the group were unsure how their audience was going to respond to their shows because, according to him, “New York had a Rock n’ Roll that was flashier." Yet despite worries, The Sunliners went on to receive a positive welcome. "We were doing something New York had never seen before. We were doing Rock n’ Roll with Detroit R&B, and they had never heard it, and they loved it.” Though The Sunliners didn’t remain a group, Ralph said the band was very close, with goals to continue music.
Russ said he’s learned many lessons about music throughout his life, but according to him, one lesson he will never forget is something he was told before working at Motown. He said his cousin’s husband gave his group a music lesson and said to them, “It’s not the sound of the guitar or the piano in the song. It’s the combination of the sound.” Russ said he never forgot that message, and an example of those words rang true in 1970, when the founder of Motown Records, Berry Gordy, called him about a specific project.

Motown was headlining its offices in Los Angeles, but still functioned out of Detroit, Michigan, where Russ and other employees continued working. According to him, Gordy said, “We just finished recording an album with the Jackson 5 and I don’t like any of the mixes, so I’m sending the master multi-track tapes to you to work on.” Russ said he asked Gordy if he wanted it mixed a certain way, and according to him, Gordy trusted his judgment and told him to mix the album the way he thought would be best. “[Berry] had enough confidence in me to put the album together,” Russ said. The Jackson 5’s album ABC released in May of 1970 in the U.S., and spent 12 weeks at no.1 on the Billboard’s R&B album charts.
“Stevie amazes me,” he said. “In Detroit, I remember a time when I was at the main building on the 5th floor (the producers floor), and I’m walking down the hallway, and I see Stevie. When I walked up to him, he said, ‘Hi Russ.’ I said, ‘Hi Stevie,’ and then I said, ‘Wait, how’d you know it was me?’ Stevie said, ‘I knew it by your footsteps.’ The guy is amazing and he is extremely human.”

Wonder is one of many friendships Russ made while working at Motown and said he is thankful for his years there. His brother Ralph said he will always appreciate Russ’ contributions in music, saying, “I want people to always remember how good he was at Motown and beyond that, and to know he has always loved music.”

Today, Russ said he looks back at his memories in music with happiness. When speaking of the people who have listened to the songs he's mixed over the years, he said, “I just want them to enjoy it. Let them keep enjoying it and sharing it with other people. If they love it, that’s all that matters to me.”